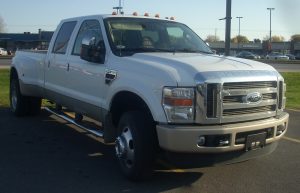 Many people notice that they get fast results working with Santa Muerte – death is famous for her speed.  One working I did in particular gives a good example of just how fast Santa Muerte can be.

My brother was a commercial electrician.  He owned a big white Ford work truck, a very common make and model that was popularly used as a fleet vehicle by many local construction companies.  Because of its size, he was unable to keep in in his tiny garage.  He kept his tools inside the house, but his truck stayed in the driveway.

Unfortunately, his type of truck was also a favorite of local car thieves.  He woke up one morning to discover that his only way of getting to work had been stolen out of his front driveway.    When he called the police to make a report, he was told that it was highly unlikely that his vehicle would ever be seen again.  Because the trucks were so common and so easily repaired, he was told, they were frequently stolen by criminals to run drugs across the border, often winding up in chop shops later.

My brother was panicked.  The insurance claim would take weeks to resolve, and he needed a vehicle now.  It also couldn’t just be any old beater truck, since his work often took him to rural, hard-to-reach places.  He needed something reliable.  A truck to replace his would easily cost forty or fifty thousand dollars, which he couldn’t afford, and he didn’t know how much his insurance would reimburse him.  He called me to ask for my help, so of course I turned to Santa Muerte.

I knew that resolving this problem for him would take a little doing, so that evening I went straight to my favorite graveyard.  I visit this particular graveyard so frequently I have taken to calling it “the office!”  I brought with me some initial gifts for Santa Muerte: seven white carnations, a small bottle of tequila, and seven bright and shiny copper pennies.  My original plan was to call upon her at the crossroads at the center of the graveyard, as I often do, and ask her to return my brother’s truck to him.

When I got to my normal spot, though, I felt that solution was wrong.  Instead I wandered among the graves, searching out a new place to do my ritual.  I felt myself drawn to a particular location, a cluster of newer graves in a different section of the cemetery.  Once I walked over, I instantly understood why I had been led there; someone else had been using a certain grave for magic already.  There were a number of coins, shells, and small globs of colored wax behind one headstone.

Encouraged, I laid my flowers and coins there as well, spilled some tequila, and asked the obviously friendly dead gentleman buried there for his help getting my brother’s truck back.  Before I left, I took a picture of his headstone so I could do a little research on him.  He had died recently, so his obituary was online.  Imagine when my surprise when the individual turned out to be a leading member of a local construction workers’ union!  He was just the kind of person who would understand just how much trouble my brother was in.  I knew that trusting Santa Muerte would lead me to the right spirit.

Bright and early the next morning, I got an astonished phone call from my brother.  The police had found his truck at a Walmart parking lot less than two miles from his house!  Since it had been missing for over forty-eight hours, they were certain it was either already across the border or in pieces in a chop shop.  Other than a little damage to the steering column, though, the truck was perfectly intact.  The thieves had even left gas in it.

When my brother told me this, I felt great pride in my success, and I felt great happiness and gratitude towards Santa Muerte.  Working with Our Lady of Death is always such a pleasure because Santa Muerte gives consistent and fast results.  It is traditional to give a saint (even folk saints!) a gift symbolizing their help in return for their aid.  Since I was so pleased, I rushed out and purchased Santa Muerte a small gold-plated truck charm and I sewed it to the robes of one of her statues.  For the friendly dead gentleman who also lent me his assistance, I temporarily added him to my ancestral altar and said a daily prayer for him for a while.  I was happy to feed his memory with my appreciation!

Those who make friends with Our Lady of Death find themselves in the curious position of actually being friends with Death – and Santa Muerte always responds like a true friend, acting quickly in times of need.  These kinds of “miracles in miniature” are common experiences for Santa Muerte devotees, and why I encourage everyone to develop a positive relationship with her!