Visiting the Graveyard with Santa Muerte 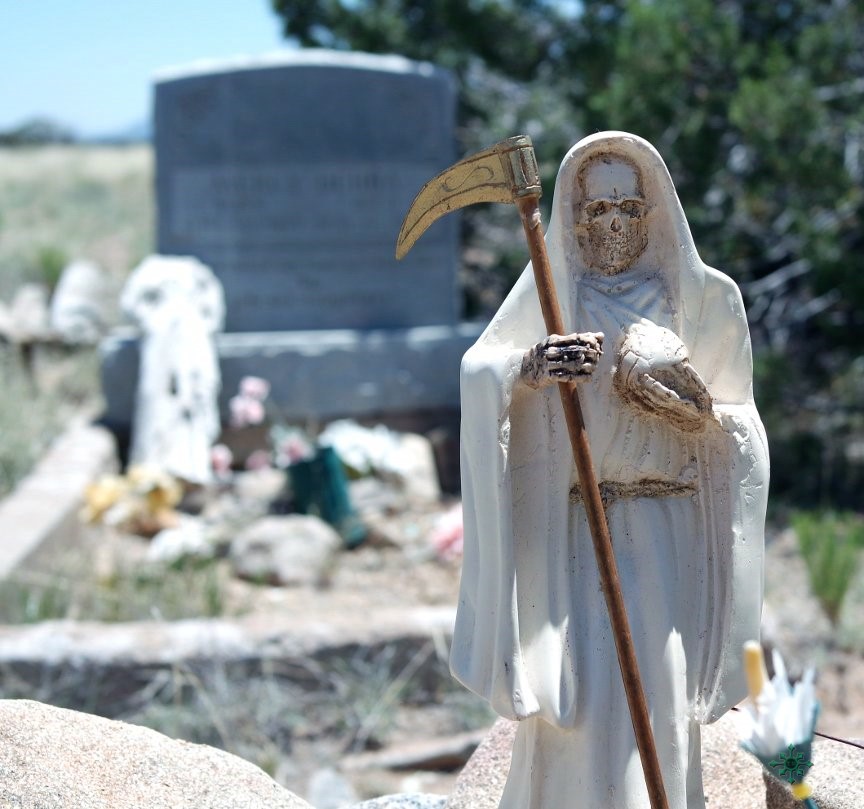 Many magicians who work with death patrons find themselves doing magical rituals in a graveyard at some point.  There is one that I visit so frequently that I have taken to calling it “the office!”  Working with Santa Muerte in the graveyard is an especially natural setting for her, since she is widely regarded as the queen of the annual Day of the Dead festival.  The Day of the Dead, which is on November 2, is a very special holiday throughout Mexico and the American Southwest.  The spirits of the dead are thought to be particularly close on that day, so entire families will troop down to the cemetery to tend the graves of their loved ones, celebrate their lives, and ask them for favors and for their protection.  This makes the graveyard the perfect place to do rituals with Santa Muerte.

There are a number of things to consider before doing magical work in a graveyard.  First of all, doing any sort of magical practice in a graveyard is typically viewed dimly by local authorities, who will assume that you’re either a) some punk vandal or b) a Satanist in the process of desecrating graves.  Doing as little as you can to draw attention to yourself is a top priority – leave the robes at home and don’t cause trouble.  Working with Santa Muerte is a particularly touchy subject.  Santa Muerte rejects no one, which means she does not reject working with people with bad intentions, both magical and mundane; remember that she’s one of the favorite patron saints of the violent drug trafficking cartels as well as the patroness of the Day of the Dead!  Because of this, being caught with Santa Muerte items in your possession in the graveyard in the dead of night (while trespassing!) is going to look very bad.

My first recommendation is to not trespass, since that is actually a crime whereas possessing a simple statue is not.  Most people like working with Santa Muerte during the late night hours, which obviously presents a problem since most cemeteries are closed at night.  I suggest that you either find one in a remote location that has no “closed time” or that you do your work during regular hours.  If you do choose to trespass, what happens afterwards is on you.

Doing magical work during more regular hours naturally means that other people will be around, such as cemetery groundskeepers and regular mourners.  Disturbing neither is also a priority.  While cemetery staff have seen a wide variety of odd behaviors at gravesides, starting small fires (ie, lighting candles) and waving your arms around chanting is going to get you negative attention.  Be discrete!  There’s nothing wrong with kneeling beside a grave, saying a rosary, and pouring a small bottle of tequila on the ground.  This happens besides graves all the time.  Just don’t make a spectacle of yourself, and above all, don’t disturb others.  Make sure to take your trash with you, and don’t take anything anyone else has left.  Those items belong to the dead, not you.

Many magicians who work with Santa Muerte observe a small ritual when entering the cemetery.  The number seven is sacred to Santa Muerte.  This is because the numbers three and four represent the spiritual and the material, respectively.  Adding them together creates the number seven as a bridge between the spiritual and material worlds.  Since the graveyard represents the bridge between our material and spiritual selves, magicians often leave seven coins at the entrance to the graveyard.  I do this as well, and I also thank Santa Muerte for letting me work in her graveyard.  This hearkens back to the ancient tradition of paying the ferryman to enter the Underworld.  In addition, many magicians will leave the graveyard through a different location that they entered it.  This is an echo of an old piece of European folklore, which said that the dead would easily follow you home, so leaving by a different way than the way you entered would confuse them.

Doing magical work in a graveyard can be an interesting and powerful experience.  Santa Muerte is a great starting point for learning how to do this kind of magical work, since she is a friendly, helpful and protective spirit – many patrons of the dead aren’t as accommodating as she is!  Just remember to stay out of trouble.  You don’t need it – and neither does Our Lady of Death!