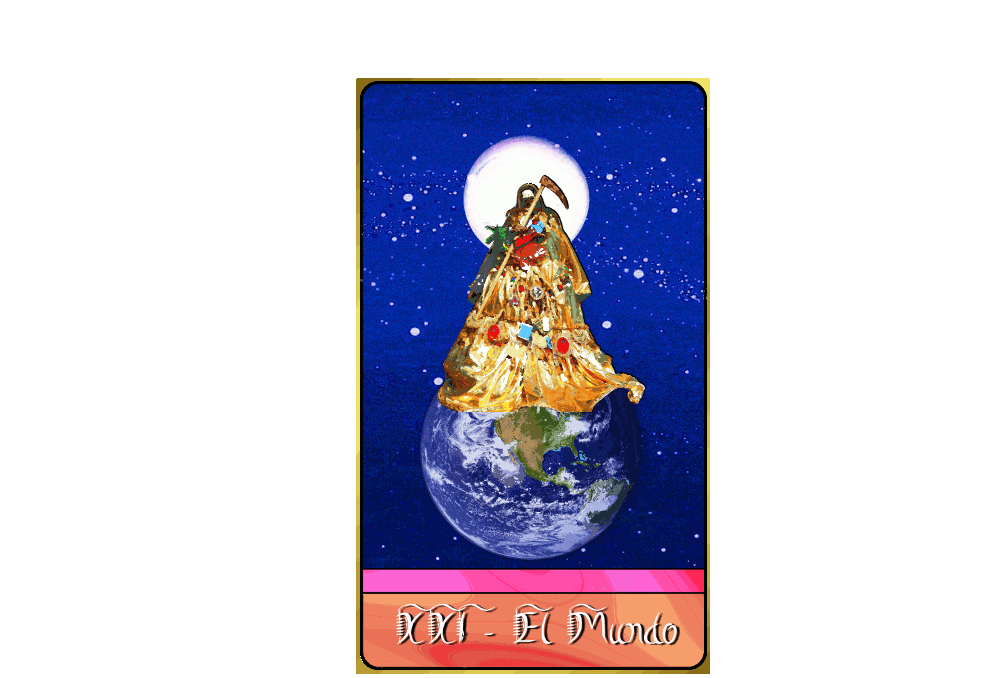 Niña Dorada is the gold-colored aspect of Santa Muerte.  She is the specific patroness of wealth and good fortune, and famous for showering her devotees with gifts.  Niña Dorada can bring both jobs and fast cash at the drop of her scythe, making her the favorite of both gamblers and those down on their luck.  She also makes fortunes grow and investments flourish, building the foundations of wealth.

Niña Dorada also has the power to heal wounds and cure sicknesses.  The reason for this is that life, death and money have always had a curious relationship with each other.  Money is classically made out of metals like gold and silver.  These metals come from mining, which many ancient people saw as taking wealth from the gods of the dead.  Since mining was (and still is) a very dangerous occupation, the gods of the dead took their “taxes” in the form of fatal mining accidents.

Gold and silver themselves were seen as different than other commonly mined ores such as iron because they shone so brightly against the surrounding dull earth.  Their luster was easy to associate with the vitality of life, which had been taken from the gods of the dead.  These precious metals were forged into tokens and included alongside fruits and grain during spring fertility rites.  These tokens would eventually become the earliest forms of money.

Because life, death and money share this ancient relationship, this aspect of Santa Muerte has the ability to cure illnesses and restore vitality.  This is why Niña Dorada is relied upon for healing.  However, some devotees choose to differentiate her money-gaining powers from her healing abilities.  This is done by substituting an amber-colored Santa Muerte in the place of a gold-colored one.  Still, their purpose is the same.

This aspect of Santa Muerte enjoys offerings that are tokens of wealth and success.  Niña Dorada loves gold jewelry and good wine.  I often give her dishes of shiny coins.  She has a bubbly and vivacious nature, so she also enjoys listening to music.

One particularly good offering to give Niña Dorada is corn.  The many golden kernels on an ear of corn symbolize wealth as well as life.  It also points back to the ancient connection between money, death and fertility.  Corn was additionally a native grain to the Aztecs.  Since Santa Muerte has some Aztec roots, corn is an extremely appropriate offering for this aspect of her.

Since Niña Dorada is normally associated with money, herbs and incenses for working with her are typically chosen with this in mind.  I prefer spicier and stronger scents owing to her lively personality, so I often use basil and cinnamon.  Cinnamon is also a good choice because it is known for “heating up” spells to make them work faster.  Combined with Santa Muerte’s legendary speed, Niña Dorada can make luck and money practically rain out of the sky.  Aloe is also a staple for doing healing spells with Niña Dorada.  This plant carries with it a strong healing and rejuvenating aura that is a worthy match for her power.

Niña Dorada has the power to bring luck, health and wealth to her devotees.  Because Santa Muerte works so quickly, there’s no reason to wait to ask for her help.  Everyone could use a little more luck and money, right?  Working with Niña Dorada is certain to bring it.