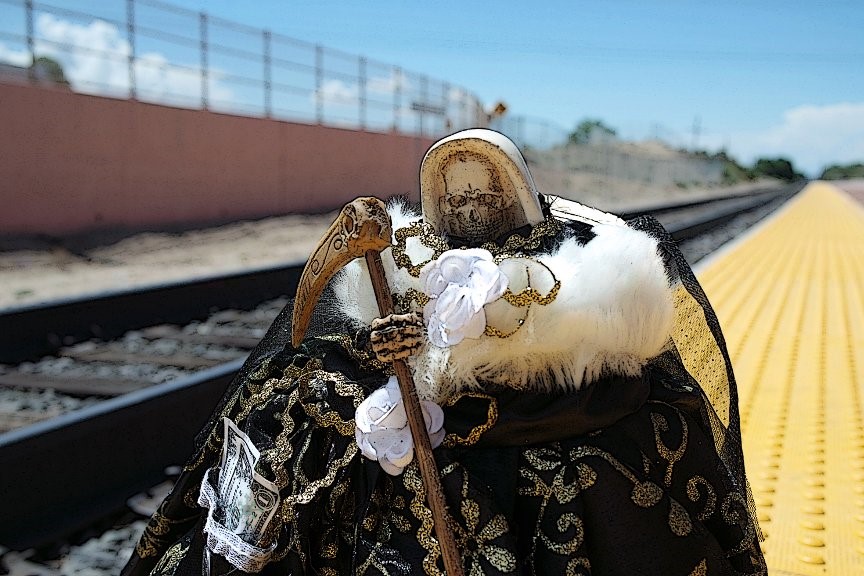 Death is a common fear, and this aspect of Santa Muerte represents the power of death fully manifested.  It must be stressed that Niña Negra is not evil.  Any power of Santa Muerte’s can be abused, and hers is no different.  The scythe of Niña Negra cuts low and cuts often.  However, her destructive capacity is most often turned towards immediate and powerful protection.

If you are the target of a curse or a nasty spirit, Niña Negra will cause your problems to cease immediately.  Nothing stops or prevents curses better or than the power of death.  Many devotees of Santa Muerte will pray to Niña Negra to prevent their own deaths by violence or accidents as well.  If the power of death doesn’t wish to collect you, then it’s much harder to die!

For these reasons, I strongly support developing a connection to Niña Negra despite her fearsome reputation.  This aspect of Santa Muerte views her devotees as her children just as much as the other aspects, and death is one angry mother that I wouldn’t want to face!

Because dying causes us to pass into the spirit world, Niña Negra can also help you spirits of the dead.  One popular use of this ability is to set up an ancestral altar.  An ancestral altar holds pictures and mementoes of your own dearly departed loved ones.  Once empowered with Niña Negra’s aid, the spirits of your own friendly dead can easily aid and protect you.  This aspect of Santa Muerte also holds the keys to other spiritual realms, and can assist with contacting angels, demons, elementals, and other types of spirits as well.

I frequently associate owls with this aspect of Santa Muerte, as well as with Niña Purpura.  Owls have long been associated with spirits of the underworld because they see very well in the dark and fly on silent wings.  Because they are perfectly silent nighttime predators, many ancient people thought they could fly easily into the underworld, and so they were thought to be the messengers of the dead.

I like giving Niña Negra gifts that represent death and protection, since these are the uses to which I put her most often.  Upon my altar I keep for her a small dish of dirt from an open grave to symbolize that death is a transition, not a finality.  I also have an old iron railroad spike.  I use this to piece harmful enchantments and ground their energy.  I also have an iron owl on my altar for her as well to assist with spirit communication.

The types of incense that I use most often with Niña Negra are aloe and myrrh.  Aloe’s sweet scent drives out harmful spirits, adding a protective element.  Both aloe and myrrh were also used in ancient times to embalm the dead, so they make an appropriate funerary incense.  I also like to give Niña Negra strong black coffee to drink.