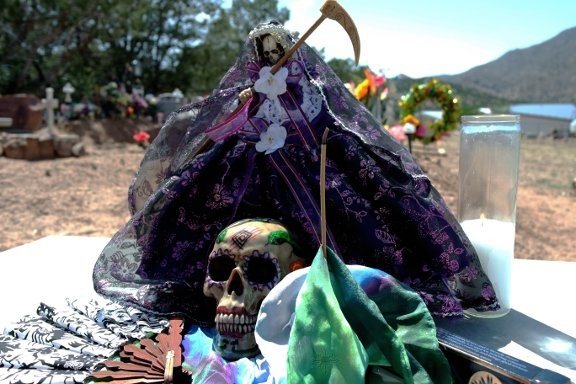 The wise old crone is often thought to be the keeper of magical secrets and a granter of psychic insight.  Since she stands at the crossroads between life and death, she stands ready to collect the wisdom of all those who pass by her, and she can see the road to all things.  This makes capable of imparting vast wisdom and psychic insight to her devotees.  She also puts the student on the path towards wisdom, ensuring that they find the magical teachers that they need.  Naturally, Niña Purpura can also protect and empower any spells that you cast, lending her strength and authority to your work.  In short, this aspect of Santa Muerte is the greatest friend of witches and magicians!

In Niña Purpura, death wears the crown of noble authority and rules uncontested from the crossroads.  Her vast wisdom and experience, in addition to her magical power, confers this authority.  When properly petitioned, Niña Purpura can lend her authority to the magician.  This makes it possible for you to command people and situations in ways you ordinarily could not.

This wise and gracious aspect of Santa Muerte likes all the things that a lady often enjoys such as flowers and jewelry.  For example, my Niña Purpura statue has several belts made out of gold bracelets.  I gave her these in thanks for the favors that I have received.

She also likes offerings that favor clarity and represent wisdom.  Pure water is a good choice for this aspect of Santa Muerte.  I associate the use of three different kinds of sage with Niña Purpura:

I do not recommend using any of these plants as a mind-altering substance (white sage is great to smudge with, but don’t smoke it!)  You never know about the strength of the plant or what medical effects it will have on you.  Please be safe and just don’t do it!  The information provided here is purely educational.

I do recommend, however, getting to know Niña Purpura fast and well.  This aspect of Santa Muerte is as generous as the rest.  She is also known for her fast results as well.  If you are trying to learn more about magic or you need help with a spell, Niña Purpura can give you the help you need and quickly.  The insights that she provides are invaluable to a practicing magician as well.  Forming a strong foundation with this aspect of Santa Muerte is therefore extremely helpful.