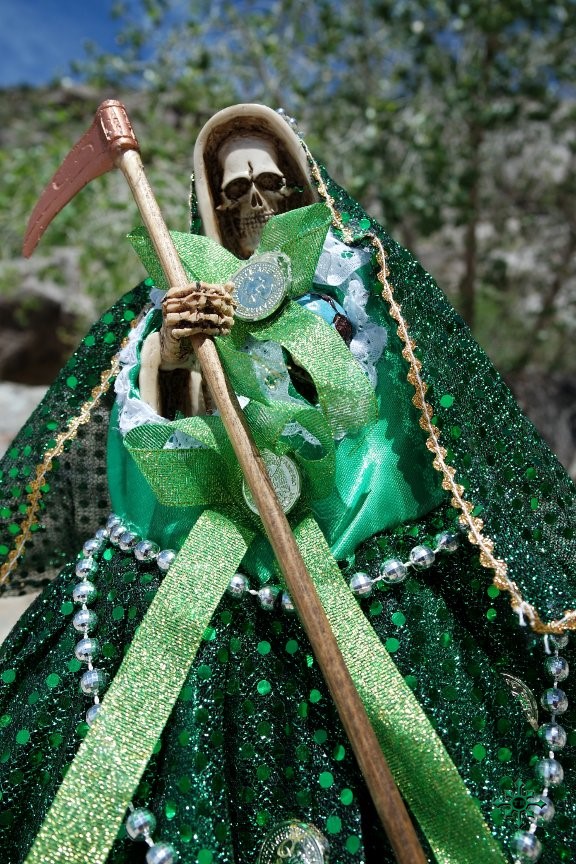 Niña Verde is the green aspect of Santa Muerte.  Her most popular function is to deflect and otherwise solving legal problems.  She can cause judges to rule in your favor (or against your enemies) and prevent you from getting sued.  Some devotees call upon Niña Verde to avoid prosecution altogether.  One of Niña Verde’s other abilities is to protect against the actions of criminals.  Santa Muerte’s legendary speed is particularly helpful in Niña Verde, since usually when you need her kind of help, you need it quickly!

This aspect of Santa Muerte’s power isn’t limited to judicial proceedings.  Niña Verde helps with all matters of judgement and fate that are decided outside of courts, and with bureaucracies in general.  Sometimes your fate can be decided by someone other than a judge.  A doctor, for example, has the power under certain circumstances to commit you to the hospital against your will.  Likewise, it is possible to end up committed to a drug rehab center by means of the legal system.  Many people who are currently in the prison system are suffering from untreated mental health and addiction problems. Sometimes these problems are what landed them in prison to begin with, such as stealing to support a drug habit.

The cycle of jail-street-hospital is very common, and one in which many people find themselves trapped.  Niña Verde can stop this cycle.  She can break the chains of addiction and mental health that bind people, keeping them from returning to the jail-street-hospital cycle.  This is why her image is often brought by patients into mental health units and treatment centers.  These devotees of Niña Verde hope that she can set them free.

This aspect of Santa Muerte likes offerings the usually given to a prisoner.  Specifically, bread with a little bit of salt and a glass of water are frequently given to Niña Verde.  She also likes marigolds more than other aspects of Santa Muerte.  Marigolds are favored because their juice is thought to clear the vision, and so is thought to lend the clarity needed to judge someone fairly.  Since I see Niña Verde as the best possible lawyer imaginable, I like to pay her cold hard cash every time she does me a favor.  After all, good lawyers cost money!  The number seven is commonly associated with Santa Muerte.  I normally give Niña Verde seven of the shiniest silver dimes that I can find in my coin jar.  After she’s earned a nice stack, I take her “paycheck” and buy her a nice new bauble for her altar or statue.

In terms of herbs that are associated with Niña Verde, juniper is one of the best plants to use.  In addition to its strong purification properties, this plant is believed to be able to ward off thieves.  Plants that are renowned for their ability to exorcise an area of nasty, criminally-minded spirits are also frequently used, including rosemary, myrrh, and white sage.  My favorite thing to use is juniper bundled with white sage as a smudge.

As the power of death incarnate, Santa Muerte is often the final judge and arbiter of all things.  This is her aspect as Niña Verde.  Her judgment is swift and final, but fortunately she often rules in favor of her devotees!  Some people neglect developing a relationship with Niña Verde until they really need her help.  I recommend getting to know her early and well.  You never know when you’ll need the services of a good lawyer, so keep Niña Verde on retainer!